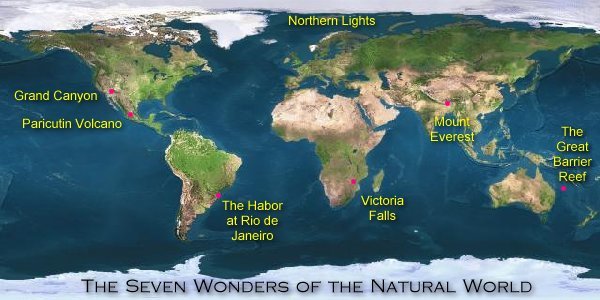 Seven Wonders of the Natural World is a list of important places and things that are wonders today and are still around right now. They became wonders and major tourist attractions when world travelers going around the world discovered them and thought they were really special. In 1997, CNN announced a listing of the Seven Natural Wonders of the World…

An aurora is a natural light display in the sky particularly in the high latitude (Arctic and Antarctic) regions, caused by the collision of energetic charged particles with atoms in the high altitude atmosphere (thermosphere). The charged particles originate in the magnetosphere and solar wind and, on Earth, are directed by the Earth’s magnetic field into the atmosphere.

The Grand Canyon is located in the northwest part of Arizona. The Grand Canyon was made by the cut of running water. The Colorado River flows through the canyon. Some people think the Colorado River was there to start with and that over the years it cut through the rock, and now it is still there. If you look in the canyon, you can see many layers of rock. Geologists believe these rocks are at least two billion years old, which is almost certainly true, but no one can be exact.

The Great Barrier Reef is actually a series of smaller reefs. Reefs form under water and can be made of coral, sand, or rock. The top of the reef sits about two to three feet below sea level. Coral reefs are found in warm, shallow, clean water. The Great Barrier Reef is the largest reef of all, stretching an amazing 1,250 miles, or 2,000 kilometers, across the blue of the ocean. It forms a natural break water between the strong waves of the Pacific and the coast of Australia. It’s location is in the Coral Sea, the area of the Pacific close to Australia’s northeastern coast. The waters around it cover roughly 80,000 square miles, or 208,000 kilometers, an area slightly smaller than the state of Minnesota. Reefs may be found as deep as 250 feet below the surface. Corals that grow below 150 feet don’t make very good reef builders.

Mount Everest is the Earth’s highest mountain, with a peak at 8,848 metres (29,029 ft) above sea level. It is located in the Mahalangur section of the Himalayas. The international border between China and Nepal runs across the precise summit point.

On Feb. 20, 1943, a cinder cone started growing in a corn field near the village of Paricutin, Mexico. The volcano buried the town of San Juan Parangaricutiro and the village of Paricutin. Paricutin gave volcanologists the chance to see the birth, growth and death of a volcano. It was greatly studied by them. Over the first year, the cone grew 1,100 feet (336 meters), the cone grew for another 8 years but only added on 290 feet (88 meters) to it’s current height.

6- The Harbor at Rio de Janeiro

Victoria falls is one of the greatest waterfalls in the whole world lies on the Zimbezi River, which forms the border between Zambia and Zimbabwe. Some people think it is one of the most beautiful sights in the world! Upstream, the river flows through a wide valley. You could probably see Victoria Falls from 25 to 40 miles away, and see its spray rising 1,000 feet into the air from seven miles away! Long before you even see the waterfalls you can hear the roaring of the water! The native people call it “mosi-oa-tunya” which means “smoke that thunders.” The falls were formed by a deep rift in the rock that lies directly across the path of the Zimbezi River. The rift was caused by movement of the earth about 150 million years ago. At the broadest point, the falls are 5,545 feet across. The height of the falls varies from 256 feet to about 354 feet in the center. Victoria falls was discovered by David Livingstone in 1855. The falls were named in honor of Queen Victoria.

You have seen the Natural 7 Wonders of the World, man also made some marvelous wonders which are normally known as 7 wonders of the world. 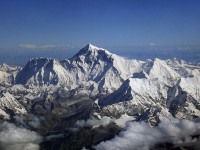 Here are a list and pictures of Top Ten Tallest mountains of the world.

All of these nature best and highest mountains are in Himalayas and Karakorum Range of Asia.