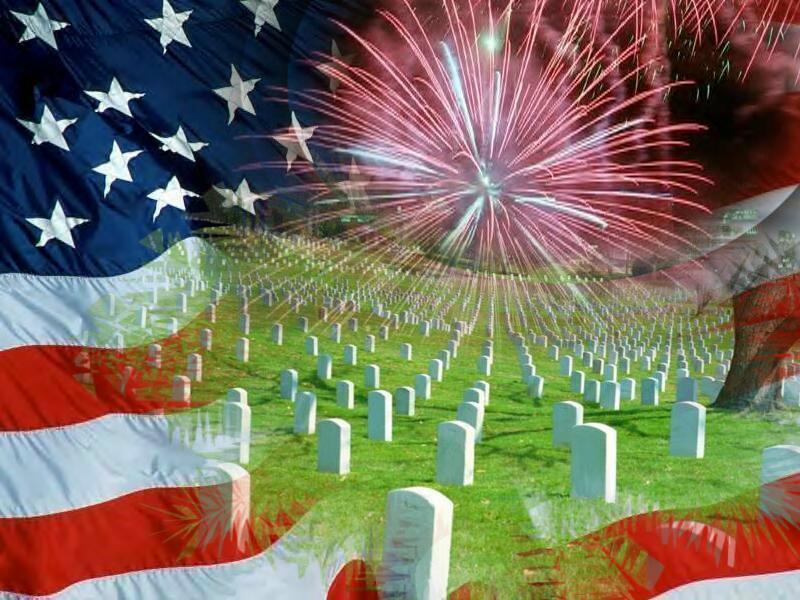 Memorial Day is a federal holiday observed annually in the United States on the last Monday of May. Formerly known as Decoration Day, it originated after the American Civil War to commemorate the fallen Union soldiers of the Civil War. (Southern ladies organizations and southern schoolchildren had decorated Confederate graves in Richmond and other cities during the Civil War, but each region had its own date. Most dates were in May.) By the 20th century Memorial Day had been extended to honor all Americans who have died in all wars. Memorial Day is a day of remembering the men and women who died while serving in the United States Armed Forces.

“The brave die never, though they sleep in dust:
Their courage nerves a thousand living men.” — Minot J. Savage, Decorating the Soldiers’ Graves

It is traditional to fly the flag of the United States at half mast from dawn until noon. Many people visit cemeteries and memorials, particularly to honor those who have died in military service. Many volunteers place an American flag on each grave in national cemeteries. Memorial Day is combined with Jefferson Davis’ Birthday in Mississippi.

Memorial Day has become less of an occasion of remembrance. Many people choose to hold picnics, sports events and family gatherings on this weekend. This day is traditionally seen as the start of the summer season for cultural events. For the fashion conscious, it is seen as acceptable to wear white clothing, particularly shoes from Memorial Day until Labor Day. However, fewer and fewer people follow this rule and many wear white clothing throughout the year.

“Alas, how can we help but mourn
When hero bosoms yield their breath!
A century itself may bear
But once the flower of such a death.” — Silar Weir Mitchell, Herndon

“The patriot’s blood is the seed of Freedom’s tree.” — Thomas Campbell, Stanzas

“And they who for their country die shall fill an honored grave, for glory lights the soldier’s tomb, and beauty weeps the brave.” — Joseph Rodman Drake, To the Defenders of New Orleans

“Blow out, you bugles, over the rich Dead!
There’s none of these so lonely and poor of old,
But, dying, has made us rarer gifts than gold.” — Rupert Brooke, The Dead

History: Memorial Day was officially proclaimed on 5 May 1868 by General John Logan, national commander of the Grand Army of the Republic, in his General Order No. 11, and was first observed on 30 May 1868, when flowers were placed on the graves of Union and Confederate soldiers at Arlington National Cemetery. The first state to officially recognize the holiday was New York in 1873. By 1890 it was recognized by all of the northern states. The South refused to acknowledge the day, honoring their dead on separate days until after World War I (when the holiday changed from honoring just those who died fighting in the Civil War to honoring Americans who died fighting in any war). It is now celebrated in almost every State on the last Monday in May (passed by Congress with the National Holiday Act of 1971 (P.L. 90 – 363) to ensure a three day weekend for Federal holidays), though several southern states have an additional separate day for honoring the Confederate war dead: January 19 in Texas, April 26 in Alabama, Florida, Georgia, and Mississippi; May 10 in South Carolina; and June 3 (Jefferson Davis’ birthday) in Louisiana and Tennessee.