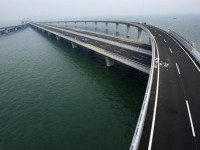 The Jiaozhou Bay bridge is 26 miles (42 kilometers) long and links China’s eastern port city of Qingdao to the island of Huangdao.

The bridge is supported by more than 5,000 pillars and was built in four years, is expected to carry more than 30,000 cars per day, and opened for traffic on Thursday.

Guinness World Records says the previous record holder for a bridge over water is the Lake Pontchartrain Causeway in Louisiana. The Chinese bridge is more than 4 KM (2.5 miles) longer.